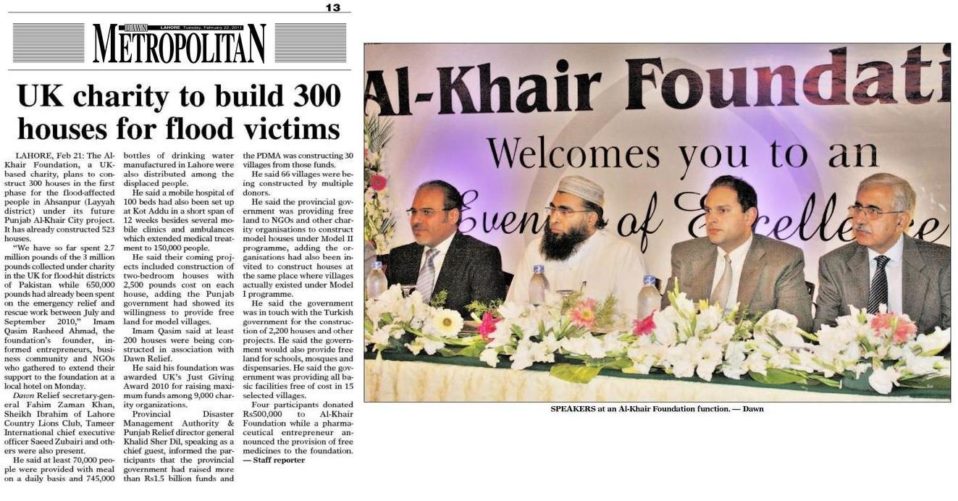 LAHORE, Feb 21: The Al-Khair Foundation, a UK-based charity, plans to construct 300 houses in the first phase for the flood-affected people in Ahsanpur (Layyah district) under its future Punjab

We have so far spent 2.7 million pounds of the 3 million pounds collected under charity in the UK for flood-hit districts of Pakistan while 650,000 pounds had already been spent on the emergency relief and rescue work between July and September 2010, Imam Qasim Rasheed Ahmad, the foundation’s founder, informed entrepreneurs, business community and NGOs who gathered to extend their support to the foundation at a local hotel on Monday.

He said at least 70,000 people were provided with meal on a daily basis and 745,000 bottles of drinking water manufactured in Lahore were also distributed among the displaced people.

He said a mobile hospital of 100 beds had also been set up at Kot Addu in a short span of 12 weeks besides several mobile clinics and ambulances which extended medical treatment to 150,000 people.

He said their coming projects included construction of two-bedroom houses with 2,500 pounds cost on each house, adding the Punjab government had showed its willingness to provide free land for model villages.

Imam Qasim said at least 200 houses were being constructed in association with Dawn Relief.

Provincial Disaster Management Authority & Punjab Relief director general Khalid Sher Dil, speaking as a chief guest, informed the participants that the provincial government had raised more than Rs1.5 billion funds and the PDMA was constructing 30 villages from those funds.

He said 66 villages were being constructed by multiple donors.

Four participants donated Rs500,000 to Al-Khair Foundation while a pharmaceutical entrepreneur announced the provision of free medicines to the foundation. Staff reporter.

Your ticket for the: UK charity to build 300 houses for flood victims